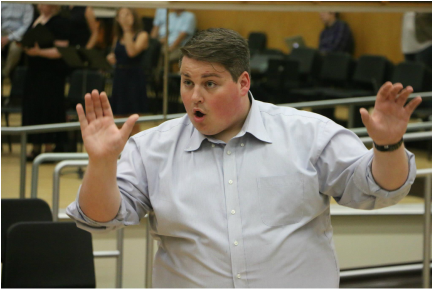 Scott AuCoin
Director of Choral Activities
A Baltimore native, Scott AuCoin currently serves as Choir Director at Marriotts Ridge High School in Howard County, MD. At Marriotts Ridge he conducts the Mustang Chorale, Men's Ensemble, Advanced Women's Ensemble, and Madrigal Singers. His choirs have received superior ratings at county festivals and won Grand Choral Champion at numerous regional competitions. The Marriotts Ridge Madrigal Singers have sung at the MD Governor's Mansion and the National Gallery of Art in Washington, DC. His students consistently participate in MD All State and All-Eastern choral ensembles. As a singer, AuCoin has sung under such batons as Marin Alsop, Matthew Halls, Christoph Eschenbach, and Helmuth Rilling. He continues to sing in choral ensembles in the greater Baltimore/Washington area.

He is also an avid music director of theatrical productions, music directing all of the productions at Marriotts Ridge. He has also conducted performances of Next to Normal, The Drowsy Chaperone, and How to Succeed in Business... throughout the MD community.

Scott AuCoin is also an accomplished composer and has written works for all types of ensembles. A winner of the Baltimore Choral Arts Society Student Composer Project, he has been commissioned by schools in the Maryland area and had numerous choral works performed at University of Maryland, College Park. Most recently, he wrote Ken's Story which was performed by the world renowned Kronos Quartet.

Art can inspire a lot more people when they're given opportunities to be inspired by it."